Nah, but Jake always said that it’s totally fine to use full prescription for driving when you need the extra clarity. So having a different set of glasses for night driving is totally fine.

Started a new office job and haven’t got into good break habits yet. This may also be a contributing factor to my slower progress???

Yeah, that can be the case easily

Everyone has said that this might eventually happen but I’m so glad that I’m almost 3 diopters down from my starting at -10 almost a year ago.

At high ranges we really want to convert our prescription to contacts and measure from there.

Thanks good to know!
I would say that I’m “almost 3 diopters down” only in glasses strength.
My actual eyes are less than that and obv. determined by many environmental factors how well i see on any given day.

My actual eyes are less than that and obv. determined by many environmental factors how well i see on any given day.

I believe they are at -6.5, and started from about -9. That’s good, but it’ll be better when you’ll go to -3.
At least you can use a phone without any lenses.

I, let’s recall, am not skeptical and not “realistic” in a certain way. When I accept that vision can be improved in real diopters, I accept it can be done faster and even instantly when you can know and create the requirements needed for that. I shouldn’t stop on a thought I should get only 0.75 to full diopter in a year. While that rate may be acceptable for you, or for me, it may be not acceptable for others. And we should research how to make the improvement more rapid or efficient. It might be not for this method of myopia reversal but in my opinion it certainly needs to be done giving into account average myopia amount gets higher and higher.

I was met with nearly the same conception in orthodontics. Malocclusion can’t be corrected, only compensated. Or go for surgery, real reversal or improvement is only for children! And that’s debunked now way more than “myopia isn’t an illness”. For a happy thing orthodontics isn’t that hierarchical and sometimes it happens that nobody cares what private dentists do in their offices, unlike huge clinics which usually conform to a certain way of thought and protocols of eye diagnostics.

So, we gradually have had: correction with surgery, slow stimulation, faster stimulation… We really shouldn’t stop increasing either speed or efficacy.

an old Chinese saying “欲速则不达”: Haste does not bring success. the eyeball isn’t some simple machine that can be calibrated in milliseconds. patience is essential

think about how long it took for you to develop the myopia, and science has proven that shortening the axle length takes much more time than elongating it, search the forum if you are interested.

an old Chinese saying “欲速则不达”: Haste does not bring success.

These rules, in my opinion, really can’t be applied to everything. They belong more to a certain culture, where intentional pointless suffering is promoted

It didn’t, at least for me

- I developed myopia while I was not using consciousness. Now I see tons of children wearing -2, -3 at the age of 4-5 - usually such a way ends up with -10…-15 at the age they are fully responsible for themself. It’s simply too restrictive for them to spend a second part of their life on reversing myopia while the first part was spent on developing it.

Axial lenglth natural change is limited to ±1.00 D per year - that is according to observations done by Jake and others, no matter in what direction, so these points are simply invalid. What do you talk about?

Also, axial length mechanism is still to be disclosed fully. There were no evidence that extrinsic muscles surely don’t hold the eye elongated, also no explanation how intraocular pressure behaves with eye length… Only what I see is the next religion that if eyesight is improvable, it needs to happen very slowly, like more than a decade to eliminate -6D. EndMyopia has gone further, there was found a way to achieve 0.75 or full diopter reduction each year. But what is the factor that urges to think it’s the ceiling? Maybe we can do something more to bring it to the next rate. I don’t say it has to be done for everyone, if that requires more intervention to someone’s body.

What is the thing common across all religions? They in fact are built on facts. But in 100% of cases, the wrong conclusions are built from these. Due to lack of some higher rule, the principle of principles, in this case most of us lack/refuse the knowledge of what the purpose of the human body is, so we feel partial solutions to be enough for us, it’s low adherence to principles and indifference/passiveness.

. It’s simply absurd and means a deficiency of emotional development

, means the person can’t imagine his/her life when these “stable” thorns will be suddenly gone. It’s the same as to say “it’s impossible to have a light source other than one by chemical means - the light is simply too complex to arise from a mechanical way” just because there were no such things by the time someone was living.

My journey is a bit extended - after all, Jake clearly made me know the forum/method is for lens-induced myopia and barely for one with other causes, however I didn’t find more science-aware forum which uses common terms and whose members adhere to official science, with quantifying the improvemnts so thoroughly.

I just find that in OP’s posts there’s a strange attitude to life, with a lot of “too good to be true” traces, expecting myopia reversal to solve everything in someone’s (or just his?) life. And willing to show some different approaches to life and their contrast. And how global trends of expectance from life change research biases a lot.

Another “Jake was right” moment for me.
Seems like a right of passage for all EMers.

I’ve now re-learned the hard lesson of a consistent measuring environment.
I’ve been in between houses, accomodation etc since moving back to Aus in March and this has meant not having a consistent space to hang up my Snelly and do CM measurements. Staying at other people’s houses is a bit hard because I’m a bit concious of looking like a nutto hanging up Charts and sticking a ruler up to my eye every couple of hours!

Now its so good. Moved into our own place and BANG. Snellen up on the wall and getting some good measurments again. Crazy that I found almost straight away that I was too under-corrected. This might explain the big fat plateau I’ve been having. This has meant I’ve (luckily) gone back up 0.25 in each eye. I’m now reading the 20/50 line on the Snellen and I ain’t reducing until I see that prick getting clearer again.

This will fall on newbies deaf ears but LESSON!!! MAKE SURE YOUR MEASURING ENVIRONMENT IS CONSISTENT!

I’ve potentially lost 6 months of gains because of this! 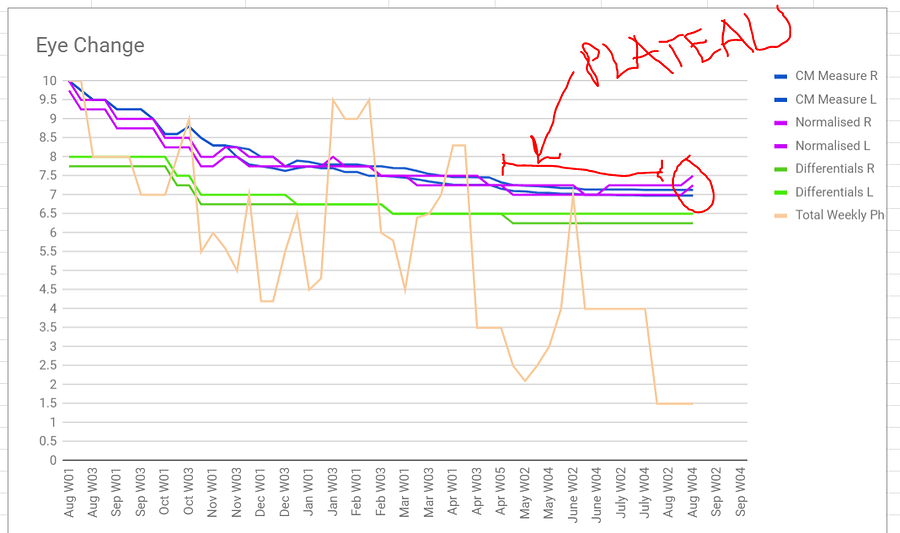 Another “Jake was right” moment for me.
Seems like a right of passage for all EMers.

I just keep repeating others experiences (while everybody walks past waving their hand, going "yea yeayeayea Jake whaterver).

At least when it happens, you know.

A diopter a year. Sometimes a plateau, as long as you had all the right habits, gives way to some quicker-than-usual gains when you get the focal plane sorted.

Another “Jake was right” moment for me.
Seems like a right of passage for all EMers

Yeah you have no right of passage until you admit Jake was right. Admitting that is the rite of passage

Yeah you have no right of passage until you admit Jake was right.

We need to find a better phrase for that. I’m just pointing out what others experienced. The idea of me “being right” is like taunting my little universe. I’m usually, most frequently, wrong in so many hilariously ironic ways.

True, maybe its just a framing.
There have been lots of things that within my journey you haven’t been “correct” on and it was a good thing that I listened to my eyes rather than you. But it really just falls down to difference in human beings, rather than “Jake being right” or wrong. They sort of fall within a spectrum of anecdotes.

Having said that there is just a scary amount of times that I’ve gone. “Gah! get back on the well trodden path like the rest of the EMers” I’m not the “chosen one” that have 2 diopter reductions per year. The well trodden path you’ve trekked is there for a reason…

To paraphrase Douglas Adams, “Jakey may be frequently inaccurate, but the beard is definitive”

(original: The Guide is definitive. Reality is frequently inaccurate.)

The Guide is definitive. Reality is frequently inaccurate

Q: How many diopters should I reduce? How long will it take?
A: 42 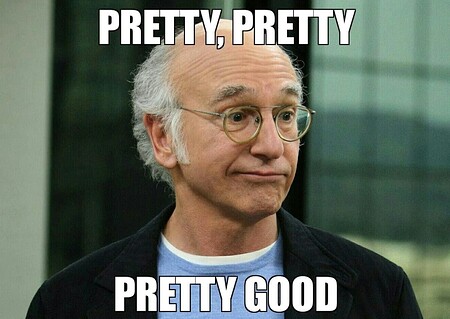 We need some kind of awards for these.

Dont wanna burst any of your bubble but was the optometrist prescription for sharp night vision GLASSES while cm measurements convert to contact lens prescription? Did you convert up to a glasses prescription using the vertex distance formula? If not the improvement is actually less but still pretty good

Yes, all of those things I havent really considered.
I really should go get an optometrist confirmed result to be doubly sure.
But, hey! still moving foward.

yeh im happy with that if thats the case!