Bea Just Eliminated 2.75 Diopters Of Astigmatism (At Once) 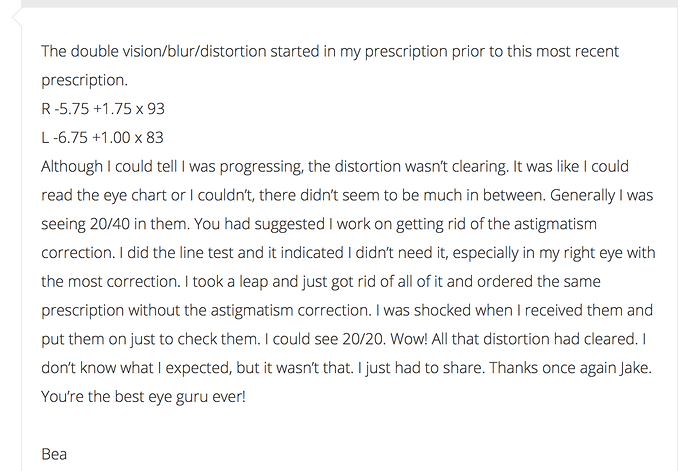 Now, I’m NOT recommending that you go eliminate all of your cylinder correction.

The interesting point here is the power of self assessing diopter needs, using tools like the astigmatism measuring options out there, and coming to your own conclusions of what your eyes actually need.

Note here that Bea is in BackTo20/20 and no newbie to optics, diopters, measuring, understanding the consequences of adjusting focal planes. Very much accomplishable with the blog as well, just not a new student move.

Astigmatism ‘diagnosis’ is definitely one of the buttons you can push to make me get all Huffy McHuffypants. Nobody has astigmatism (or at least, the odds are very small) - until the optometrists get their hands on people, and create it. If you go to your optometrist who has your existing ‘prescription’, they’re not going to think about reducing any diopters. It’s entirely up to you to take matters into your own hands and learn how to assess your acuity!

And the plus cylinder notation makes dropping cylinder easier in terms of math…you just drop it, instead of adding some more sphere also.

Eeeh @FMR, if you just drop a whole lot of plus cylinder, you push the average refraction a whole lot into minus direction. I’d rather go with spherical equivalent in such a case.

Eeeh @FMR, if you just drop a whole lot of plus cylinder, you push the average refraction a whole lot into minus direction. I’d rather go with spherical equivalent in such a case.

Yeah, if you’re dropping a lot of it, sure. But most will be dropping 0.25 to 1D of it, max, at a time. Have we ever had anyone drop more than that at once??? It’s the same result as with the “drop and add minus sphere” method for minus cylinder. I believe some people have actually added a bit more than 1/2 the cylinder they’ve dropped…no? Like someone dropped 1D of minus cylinder and added 0.75D of minus sphere and it helped them. I swear I read that.

In any case, I think this is another reason maybe Jake advocates alternating spherical and cylindrical reductions…not just because of the brain, but in case someone screws up the cylinder reductions. It’s like a safety net.

We should definitely keep the plus/minus cylinder and spherical equivalent distinction circulating in this forum, though, as people ask their questions. Because if not, one day, someone is going to cut a bunch of plus cylinder and add more minus sphere on top of it, and then wonder why their vision is worsening or uncomfortable!

Edited to add: I think it was @AmandaLegault I was thinking of who was the exception. She started with -4.75/-1.75, -5.75/-1.75 and dropped all the minus cylinder, but upped the minus sphere by 1D, which was 0.125D higher effective minus. She could have just as easily rounded down, but maybe the tiny bit of extra minus sphere actually benefitted her for reestablishing clarity with the new glasses…just a thought. I get what you’re saying though, @Varakari. If someone took this to an extreme, they could end up overcorrected. Your idea to utilize spherical equivalent is a wise one, and I will be making sure people know how to calculate it so they can do that if they need to.

@FMR Yeah, it should even out for conservative 0.25 changes with measurement and spherical reductions in between. But in any case, there’s a point to not make different decisions based on the astigmatism notation. It’s better to make changes based on the actual optics, not the whim of whoever wrote a prescription.

As an example calculation, let’s say someone has this prescription:

If people just “remove” this cylinder without understanding the optical structure, they’d end up with -2.75 glasses or -2 glasses depending on the whim of the prescription. 0.75 dpt difference! That is a full year of improvement at Jake’s standard rate. It should be clear that this is not something you can ignore.

So at least any cylinder change larger than 0.25 dpt should not depend on notation.

@Varakari, agreed. And as always if what you’re wearing is too strong and not comfortable, it’s definitely time to reduce, and possibly by more than 1/4. The moral: go by your vision and how your eyes feel.

My bigger point was: Don’t add minus sphere when cutting plus cylinder!!! Definitely a more extreme case.

I suppose trading a certain amount of astigmatism for a tiny bit more myopia can be a useful tradeoff in some cases.

I think some optometrists use plus cylinder to partly cut out minus sphere when someone is on the fence (some optometrists unfortunately don’t believe in removing minus for a nearsighted person even if results show improvement). But we both know that’s not proper use of plus cylinder. It’s like another extreme case, in reverse, of what we’re discussing above…and relying only on spherical equivalents. They really should “add plus sphere”, even if they don’t believe in “removing minus sphere”. And some do this, but only at near, and create worse presbyopia in people with it…when in reality a cut in minus sphere, rather than an artificially induced increase in presbyopia, was warranted. I think this is why some find presbyopia reduces with myopia improvement.

Yes I did and it worked like a charm for me! And I’ve reduced .75 SPH already on top of that (now -5, -6, no CYL) and my eyes are happier than they’ve ever been. My visual acuity is better now than I can ever remember it being with any other level of correction!

@AmandaLegault, almost back to the original power but without the cyl! Way to go!

insane… just insane… that’s why I love the eye guru…where else am I going to hear this?

“Nobody has astigmatism (or at least, the odds are very small) - until the optometrists get their hands on people, and create it.” Jake Steiner