Eye alignment and teeth alignment; my case of eye misalignment

I found a person called Ilaria. She underwent treatment using a dental splint.
She claims she fixed “eyes converging” after using it for 3 years - and that was esophoria or esotropia.

So the 3 main deficiencies I’ve found concerning my eye alignment:

Right gaze
Target distance: 80 cm
Almost normal alignment (although the distance is a bit too small to for it to happen); I see with the left eye more stable than with the right.
To note, there is “tremor” of images (mostly horizontal but sometimes also vertical), due to active effort to fuse two images - hence the deviation is “restrictive”.

Down-lateral gaze will be skipped here; there is a bit more deviation and restriction.
After the lateral gaze, gazes horizontally central also encounter slight deviation with much more phoria and pulling feeling from the nasal side and/or from temporal side if I want to force seeing distant objects using both eyes. So there is medial rectus spasm as well after using it even one time to move eyes sideways or to read a book from a usual distance for 5-10 min. Even distances of 1 m have shown to induce a spasm if that was for long.

I can manage to see distant objects normally in down gaze - and I do it always.
But if I “loose” my eyes, I can get esophoria, sometimes as severe as this: 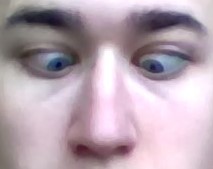 When looking very up my eyes sometimes tend to move out a bit with a moderate amount of external rotation:

When sleeping with dental splint in, it was shown eyes tend to have a bit less restriction of divergence in downgaze, but that can be also attributed to DIY vision therapy also been done more often those days.

The first of three ophthalmologists I went to only checked my convergence while my problem was in divergence. The second behaved so arrogant that I even couldn’t tell him all of the symptoms and the third does not see a problem. The assistant of second also is an ophthamologist perhaps and she checked my eyes at convergence device. And it resulted I have misalignment by 12-15 degrees, but no specifications convergent or divergent - as far as I remember she told me to actively diverge my eyes thus what the appliance showed is a hoax. The second ophthalmologist after said I am just tense while I get misalignment when relaxing, and my feeling is he just speculated to not take the responsibility. Fortunately I psyched at a correct moment that if he will not answer all my claims about strabismus I must pay nothing for his work and let to quit right now - so I principally have got no charge due to his stubbornness

About Ilaria’s malocclusion, she found no specs about teeth misalignment she had. But she prefected everything now so “her smile is perfect” as described at the page about her.
But I had Class 3 with over-bite while comparing my teeth alignment with pictures of possible classes. Also crossbite with lower jaw front teeth center to the right.