Had About Enough Of This: Endmyopia Causing Vision Issues?

Lately a steady trickle of people complaining of transient astigmatism, while clearly being unprepared for the experience.

A mix of complaining about ole Jake, and just questions, and generally making me concerned that this is all not really meant for the lowest common denominator - while somehow still becoming accessible to that contingent.

It concerns me since that does affect a person’s vision, and if they stop at that point, then there’s the potential for “Jake messed up my eyesight” … which we can’t have going on. I’ve considered going paywall or otherwise lessening access further since I really rather don’t feel like having my name attached to not positive outcomes. That’s all risk and no reward as scenarios go.

I posted this, including musing of a paywall future:

Endmyopia® - Improve Eyesight Naturally has 21,309 members. Group: Endmyopia.org - Improve eyesight naturally. Vision science (not medicine), and myopia as a refractive state (and not an illness)....

And new disclaimer in the e-mail series:

I’m not on Facebook and I don’t think the link to the complaints is working (at least it didn’t for me), could you (or somebody with Facebook) screenshot it here for us non-Facebookers?

By the way, I tried your diet and it made me fat and now they tell me I might have to have a heart transplant and it’s all your fault because if I never tried your diet I never would have gotten fat and lost my job and got heart disease and had my dog run away.

There’s always going to be some of those sorts of people around. 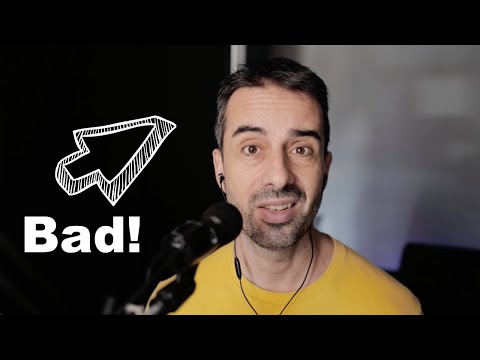 Facebook notifies me automatically of new posts at that Endmyopia site. I share—though I’m sure to a lesser degree than you—your frustration at the level of posts there, and I almost wonder if it’s counterproductive to have a Facebook site for Endmyopia. If comments to your YouTube videos also were to become a problem, you could eliminate the ability to comment on them. There’s something to be said for keeping your message from contamination via misunderstandings, inattention, or ill will that could lead to widespread misinterpretation of Endmyopia. That would be a very great pity, and it might be more than your army of satisfied followers could effectively combat.

I learned about the method via a podcast on which you were a guest, which then referred me to your own links. Even though I’m a regular Facebook user, I would probably never have discovered EM via Facebook. I think your appearances on the podcasts of others and your own YouTube outreach are probably the most effective things that you can do until people are ready for this higher-octane group, and those media are least vulnerable to misrepresentation.

musing of a paywall future 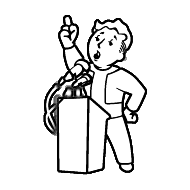 Noo not a paywall

If EM ever goes paywall I’ll probably rip everything off from here and become the wannabe eye wizard, unlikely to surpass the original. That’s what happens when you make a really good resource

Actually we can make a medieval kingdom of vision improvement people in this forum… we’ll have king and queen, jester, cook…

Please spin off the free resources to people who still want to maintain them, and take all the blame for negativity, if you are going paywall 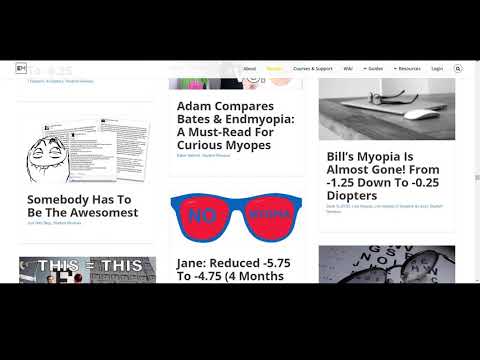 Anyway, Jake won’t actually paywall guys. If he does though 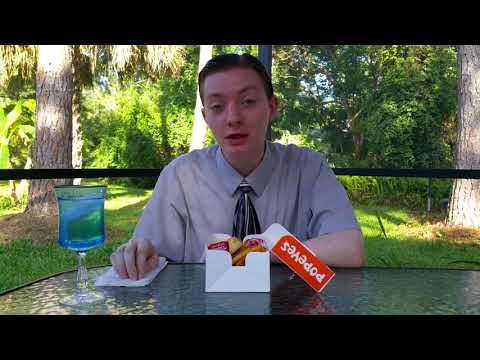 I know there has been a flood of this stuff, especially lately, it seems to hit in waves, but don’t let it cast a shadow over all the good EM has done. The disclaimers are a good idea though… Maybe we work around the “lowest common denominator” a lot of programs have basically reading comprehension tests at the end of segments. It is usually multiple choice but you can’t proceed unless you pass with a good score… it’s a thought…
Another thought is a follow up mini-series (or even just an eighth day) primarily about double vision? I am sure the community would pitch in and write it if you wanted to sign off on a secondary series. I am on board at least. It would naturally put all your videos on the topic in one spot to supplement the text… Just rolling ideas that don’t include paywall, or a manageable paywall is a thought too, like the rough guide but on a diet for a slimmer price tag… Though I still hate the paywall idea, if I had hit a paywall I wouldn’t be here

We can put a positive spin on this.

Yes, the disclaimers are excellent. They would stand up in court, but I’m not sure they will do much to combat less formal misinterpretation and false accusation of Jake personally. Such people have already demonstrated a substandard reading comprehension. And however manfully Jake stands up to abuse, the potential damage to Endmyopia itself could be considerable if, being read by other uncomprehending readers (including people, who through no fault of their own don’t read English easily or with precision), such posters become breeders of misinformation.

I have a very simple theory for the binocular DV during a 0.25D improvement.
One eye is always quicker and the other one lags behind.
Initially there’s blur from both eyes. The 2 images are not aligned but the blur is big enough to cover this fact.
Then the quicker eye sees clear and the other one is still blurry. Actually it is not a sharp image and a blurry image perfectly aligned yet, but because it’s a strong image and a blurry image, the misalignment is not very noticeable at this phase.
Then the other eye catches up, too, and there’s double vision until the brain sorts out the now different inputs and fully aligns the 2 sharp images.
This type of DV always came to me when the non-dominant eye (semi-unexpectedly) improved to the level of the dominant eye.
The trick is consistency with good habits and lots of patience.

The DV within one eye is typically a lingering cylinder (not an opto prescribed cylinder). One part of the eye improving easier and another part needing just a bit more time. Eye moving towards the lower correction like the chewing gum pulled away from the surface - not all parts releasing at the same time.
For this one it helps looking at parallel lines for a few minutes every now and then. To give a trigger to the eyes. Nothing else just looking at these squares and circles for 1 or 2 minutes per occasion and see if the parallel lines become equally clear in all 4 of them. If it is simply a ghost astigmatism, only the circles will provide some challenge. 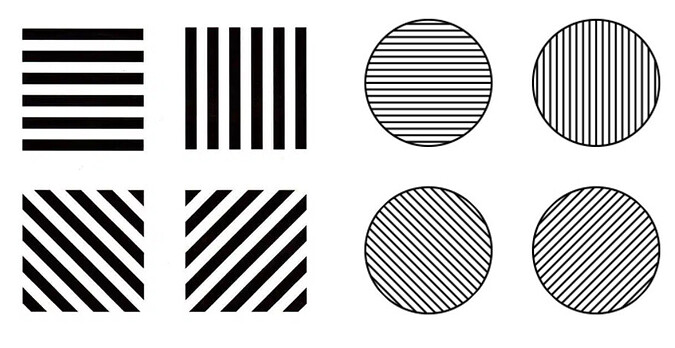 I have seen a bit of this in my “you can do it yourself at home” field too. We empower people to take things into their own hands and make changes for themselves, but not everyone is willing to take responsibility or advice.

@Taro has a point. It can’t both harm and be without results at the same time. A disclaimer could be made to check with your eye doctor regarding safety before starting an EM program at home. If the doctor’s response is discouraging (“That is impossible”), that is for the person to figure out. That is an issue of effectiveness, not safety.

The double-vision warning is also good if that’s the main problem to be expected.

Maybe just go the other way with it altogether.

Endmyopia is an illegal community of biohackers who use unapproved methods to achieve vision improvement in violation of local, state, federal, international, inter-galactic and religious laws. Proceed at your own risk. Not valid in Hong Kong.

I almost wonder if it’s counterproductive to have a Facebook site for Endmyopia. If comments to your YouTube videos also were to become a problem, you could eliminate the ability to comment on them.

I feel I need the collective voice of … reason (?)

to keep a pulse on where I’m at relative to people’s perception of what I say.

This double vision thing is a good example. It annoys me but it also says, emotions removed, that the content presentation when consumed by enough people has a problem. In this case, people are missing the double vision thing. So after I’m done being annoyed I add more disclaimers and make a video and basically adjust to the feedback.

Hater talk is feedback, complaints are, so is polite, productive, helpful comments. Just a matter of getting my feelz out of it.

I can’t stand Youtube channels with comments turned off.

If EM ever goes paywall I’ll probably rip everything off from here and become the wannabe eye wizard, unlikely to surpass the original.

Couldn’t happen just because I’m way too disorganized and way not motivated enough to actually make a thing that people could spend money on (at scale) and be happy with.

Plus from experience, nobody would buy it.

Though I still hate the paywall idea, if I had hit a paywall I wouldn’t be here

We can put a positive spin on this.

“So you are saying, you found this guy online who claims to be the last living eye guru, whose wisdoms come to him from his imaginary beard. And you read his posts on his blog and then on your own decided to ignore your optometrist’s explicit warnings, and bought yourself other glasses. And now you believe this … imaginarily bearded guru, yes? is at fault.”

Less concerned about court, more just the simple reality of people messing with this who just aren’t either mentally equipped to, or being poorly advised by our ideas. I don’t want anybody out there with double vision, freaking out about their eyes.

I have a very simple theory for the binocular DV during a 0.25D improvement.
One eye is always quicker and the other one lags behind.

Yea I’ve had some similar theories.

Endmyopia is an illegal community of biohackers who use unapproved methods to achieve vision improvement in violation of local, state, federal, international, inter-galactic and religious laws.

I can’t stand Youtube channels with comments turned off.

My gut reaction to those is that they have something to hide.

My gut reaction to those is that they have something to hide.

Or that they’ve been burned by haters.

Can we paywall Jake’s trolling attempts?

It concerns me since that does affect a person’s vision, and if they stop at that point, then there’s the potential for “Jake messed up my eyesight”

And then we also have the “Endmyopia / active focus causes floaters” myth. I’m not sure if that’s addressed directly in the “official” materials (@gemilymez has a great video about it, I remember that).

I don’t want anybody out there with double vision, freaking out about their eyes.

Agree. I want everybody to be safe and go back to their optos and get a stronger pair of glasses every year. How dare you mess around with the widely accepted eyesight ruining practice of the opto industry, the one truth on how to ruin your eyesight properly?!? You can’t even guarantee the same bad results every time. 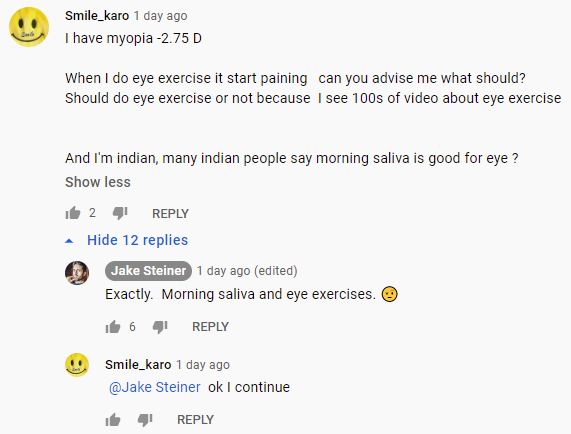 What. I’m just agreeing with him.