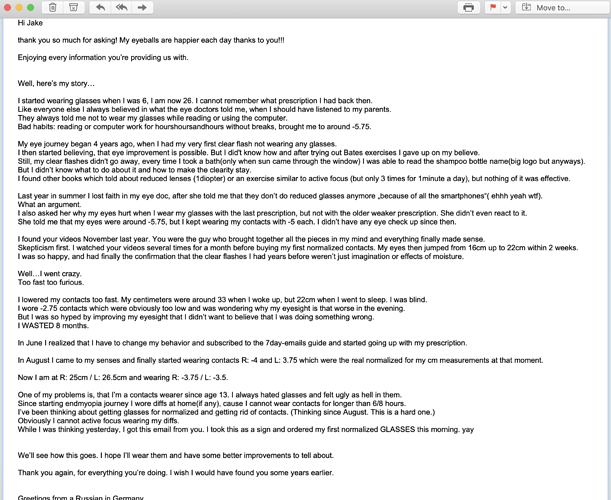 Let’s use this one for a bit of casual reflection of the blog and general proceedings.

Sometimes the (highly dignified and regal) rants about Bates method confuse the casual reader. People don’t have for context the volume and content of e-mails in the guru inbox, which very often include “I tried Bates because I believed I could improve eyesight - then that didn’t work so I gave up on the idea”.

These things aren’t just useless, they actually cause people to think vision improvement is impossible.

Then there’s the whole general theme of ranting about lens sellers which again … after thousands of e-mails saying very similar things, one may be inclined to consider the industry a giant, dumb fraud. This too may seem a bit overwrought for the casual reader. Think though, thousands and thousands of e-mails saying “hey my optometrist tells me to shut up and not question anything and I’m a genetic failure and I need $600 glasses”.

And then all the other things we talk about frequently, like don’t reduce too much, consider at least part time glasses over contacts, etc etc. Most of what you see is a reflection of input and feedback from so many people from all over.

All that to say, keep the insights coming, they define a lot of the structure of what I put out there. If nobody complains about Bates, I won’t talk about Bates. That and you’re not alone, there are countless of us out there in the world, trying to find the same exact answers for our eyeballs.

Also whenever I may seem overly harsh or reactive, realize it’s probably not you (or whoever set off that particular avalanche), but the cumulative volume of feedback and inquiry.

I like Bates, and use a lot of his ideas and concepts…but without the more modern method that is better suited to our current situation with lots of artificial reality screens and overabundance of artificial focal planes being tweaked at every corner glasses shop, we wouldn’t be where we are today. Bates’s time was simpler…less screens for sure, and less reliance on glasses, so it was easier to fix by throwing away glasses, versus today. But I still believe he deserves credit as one of the building blocks for where we are today. He said the eyeball elongates from close work very quickly. Modern Optometry argued against it for so long. But now they’re realizing it actually happens, through studies. Just one of many ideas he pioneered and experimented with. He also claimed the ciliary muscle didn’t do much. He was wrong about that. So he’s got good and bad points for/against him.