Is there even any proof myopia is genetic?

So the establishment claim myopia is genetic. But do they have any proof of that? And how do they explain that in some areas over 50% of people have that gene all of a sudden? Genetic illnesses usually affect a small amount of people, like 1-2%.

To be honest, I’m surprised myopia is not yet declared to be an autoimmune disease.
That’s the collective term the world uses for wide spread health defects that cannot be cured or otherwise explained but appeared in the past 30 to 80 years due to changes in habits, lifestyle, environment, manufacturing, etc.

how do they explain that in some areas over 50% of people have that gene all of a sudden?

Your body can’t do what genes doesn’t allow it to do (at least not without serious harm). All people who have myopia 100% have the genes for myopia. Saying myopia is genetic would never be wrong.

Something pertaining the human body is going to be genetic. Right, even things “completely environmental” like losing a limb. There were genes in play that lead to a circumstance where the person lost a limb.

And then the conversation quickly turns into a discussion about heritability which is a very obtuse and finnicky topic. Because it is about how much a different outcome can be attributed to differences in genes. But the tricky part is that it only examines group differences so the data cannot be applied to individuals. Something along those lines.

I think there is a genetic predilection to become myopic but that is not to say that the individual therefore will be myopic. The tendency for certain people is undeniable but that doesn’t mean that myopia is unavoidable as the industry suggests. Genes play their role but without a doubt the learned behaviors from parents and lifestyle factors play a big role as well. Your great-grandparents may have had the markers but not needed glasses because lifestyle didn’t allow them to have so much close up time. There are a great many genetic predilections, the so called eye care industry is the only one that seems to think there is no point in taking preventative action.

They’ve gotten into it in a big way now that they’ve figured out how to make money from the prevention angle. You're running very late if you haven't heard the current hype surrounding myopia. But are you aware of the spectacle and contact lens options available to slow and even halt myopia’s progression?

now that they’ve figured out how to make money from the prevention angle.

My bad, you are absolutely right! I left of the big ticket motivation behind how “genetic” myopia is.

So the establishment claim myopia is genetic. But do they have any proof of that?

Not really, in fact it’s been known from medical textbooks for over 150 years that myopia is to a large extent an acquired condition. 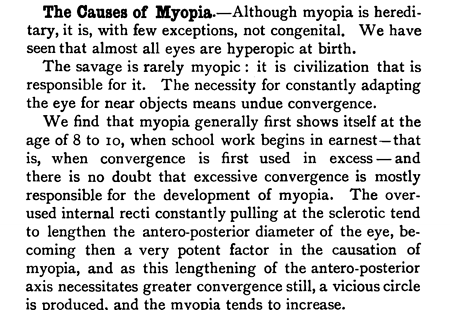 [These textbooks are from mid 1800’s, long before Bates started publishing.]

And your parents might have had myopia up to -1 or -2D but you can easily get -5D to -8D thanks to the eye care industry.

You raise another solid point there, with vision screenings becoming more frequent and on younger individuals with every generation in the spirit of early intervention and such, it leaves a lot of room to crank up those diopters.

But we should not disregard the increase in close up time and the sedentary lifestyle we ended up with. We could almost live without distance vision soon. Evolution could drop it as not needed. Just stay at home scrolling on the screen all day and travel with self driven cars…

They say your genes are loaded at birth but the triggers come from lifestyle.

It’s impossible not to trigger myopia with all the screens around us.
But then, optos haven’t had an update on their responses to myopia treatment for at least a hundred years now. So the more defect they find the higher correction they will prescribe.

It is interesting to note that when the work is approached very near the eye, but convergence is not used, as in the case of watchmakers, who habitually use a strong a strong convex glass in one eye, there is no special tendency to myopia.

Does that mean eye patching while doing near-work can prevent myopia? @nycmao

But we should not disregard the increase in close up time and the sedentary lifestyle we ended up with.

Certainly not, which was what I intended in my first response.

But then, optos haven’t had an update on their responses to myopia treatment for at least a hundred years now. So the more defect they find the higher correction they will prescribe.

And therein is the problem.

From what I can tell so far, in the 1800’s hyperopia was a lot more common than myopia (and probably still is in places where “modern medical science” hasn’t intervened) and glasses were much more “task specific”, more like a pocket watch. 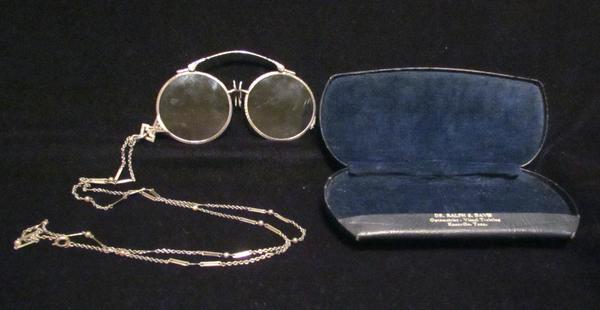 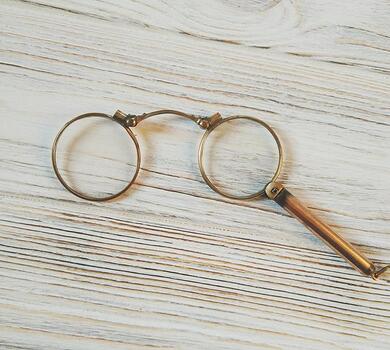 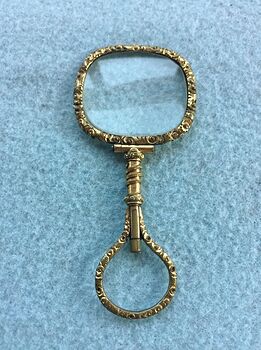 In the early 1900’s styles changed and they started telling people to “wear your glasses all the time” and other lousy advice. Instead of being something you took out of your pocket to use when you needed it, they became a “permanent intervention” with disastrous health consequences.

Does that mean eye patching while doing near-work can prevent myopia?

I don’t know! It might help actually but I would be scared to do a lot of it. I’m a big fan of base-in prism for computer/reading glasses to reduce eyestrain from convergence. Watchmakers used to sit near the window in good natural light and then look through a very powerful plus lens. They also don’t start doing that when they’re little kids. Apparently in the 1800’s they almost never came down with myopia. Plus lens with base-in prism for students stops myopia progression completely (Haberfeld 1934), and plus +1 lenses alone (by themselves) prevent myopia in susceptible children (Russia 2010 I think, have to find the study.)

As an adult you might be OK with alternating patches for near work (a lot of people do it by closing one eye), but for little kids it could seriously harm them (according to Stanford’s Huberman.)

Is that what they use for strabismus?

Why not just use a slight plus lens?

Does that mean eye patching while doing near-work can prevent myopia?

Even if this were true
I can only imagine how excessive amounts of this would cause changes in brain real estate leading you to having a lazy eye.

Is that what they use for strabismus?

Base-in prism causes your eyes to diverge, so the trick with reading or computer glasses is to allow your eyes to converge a lot less when you look at something up close. Base-in prism with plus makes it look like your laptop screen is a giant movie screen far away, it simulates distance. Instead of having your small laptop or phone 30 cm away, your eyes are looking at it like it as if it were a big movie screen.

All these various tools are useful and can also be abused, somehow optometry has managed to find the most abusive ways to screw everything up and misuse all the tools they’ve been given from previous generations. Instead of relieving fatigue they’re encouraging bad habits to get worse. Amusingly (or sadly) in the 1800’s medical textbooks they used to explicitly warn NOT to do these things that are now common practice because it would make things worse.

Plus lens with base-in prism for students stops myopia progression completely (Haberfeld 1934), and plus +1 lenses alone (by themselves) prevent myopia in susceptible children (Russia 2010 I think, have to find the study.)

It wasn’t enough for my child. When the hints of myopia started showing up at age 7, I immediately got her +1.5 glasses (measured to her IPD), and insisted they get used for all close-up. Despite that, progression occurred to 0.75D over the following year, where it seems to have stabilized. Not too concerned, I can teach how to correct that later on

As far as the subject at hand, I have a hard time believing a growing mass of cells (from a single egg), which has so much variability (thus we all look different, even twins have differences) can grow eyes that are perfectly calibrated on it’s own. There must be some sort of built-in autocalibration technique. We have trouble making optics for camera lenses without some variation. Go visit a camera lens forum sometime, you’ll see how this plays out. And this is with precision machinery to make those camera lenses. A mass of growing cells? No way that will nail the calibration without some sort of biological calibration mechanism in play, IMO.

The key (and the reason Jake succeeded in his myopia reversal) is understanding how that calibration works, and using the correct stimulus to recalibrate our eyes (or in the case of a child, prevent it in the first place).

With my other child, when he’s old enough to show signs of myopia, I’m going to try a different technique. Plus glasses, yes, but also try to train him not to rotate his eyes (e.g. read while lying sideways on his bed with the book not aligned with his eyes). Rotating the eyes engages the obliques, and a lot of that (e.g. to deal with view rotation) can alter the accommodation (according to my theory), which can “train” you to use the obliques to help accommodate when the ciliary get tired after hours of close up. According to my theory, plus glasses, alongside with efforts to reduce/eliminate using the obliques for accommodation might be the ticket to prevention (I hope). If I fail again, there’s always active focus!

It wasn’t enough for my child.

Personally (not giving advice obviously) I’d try plus with base-in prism (3 or 4 PD base-in per eye), just for reading and close-up only. With plus alone you eliminate accommodation but still have excess convergence.

Ideally you’d find some way not to be doing excess close-up work for little kids, but I realize that the world we live in with the educational demands doesn’t exactly lend itself to that kind of ideal environment.

If you can get the book or image up on a big TV screen or use an overhead projector or something like that, it would solve a big part of the problem. (Still not as good as getting outside.)

Even if this were true
I can only imagine how excessive amounts of this would cause changes in brain real estate leading you to having a lazy eye.

Watchmakers and people who look through microscopes and telescopes etc do it and don’t get lazy eye, but I agree for little kids it’s not advisable at all.

They don’t patch but they look at things with one-eye through their instruments for as long as they need to. Patching isn’t the right answer. Using the proper tools for the job when they’re needed for special tasks is the way to go.