Reposting this here, just because.

It really seems that it’d be responsible to tell “patients” what to expect when they accept various kinds of focal plane changes. When a treatment literally causes a highly likely consequential ‘symptom’, confirmed by a ton of peer reviewed, published clinical science, one would think a disclaimer would almost be necessary for liability purposes.

In other words, if it’s really rather well known and documented in ophthalmology journals that these lenses are likely to case more myopia, shouldn’t people be told about this? 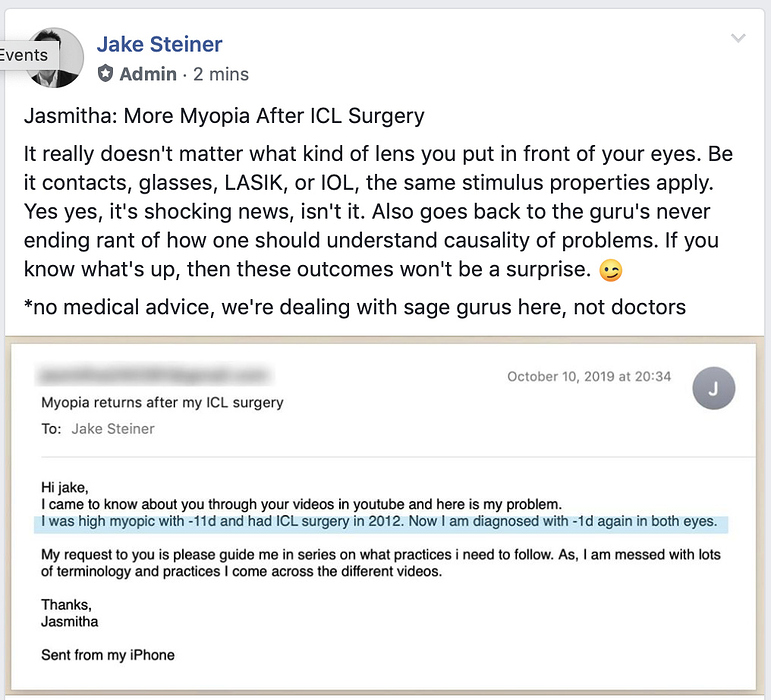 So disturbing. I remember when PRK was first being advertised. Even without considering what could go wrong, when I thought about someone going near my eyes with a cutting instrument, my brain said, “No.” It was loud and clear. Now I shudder over what could have happened if I had done it.

I sure hope Jasmitha does ok. She can get suggestions here at La Meow or your Facebook page. But beyond having her read your blog and watch your videos, what else can be done for her? I’m just not sure.

I was speaking to a co-worker about endmyopia and he was telling me he was going to get lasik. I believe he is a low myope because my job requires a certain vision acuity. So he was saying that he would do a lasik procedure that his mother had done. I told him to be sure and research it and asked what if his eyes get bad again. He fully expected that he would have to do it again in 10 years.
This just blew me away, if money wasn’t an issue I still wouldn’t consider having a procedure done that I knew would have to be done again in 10 years. You only have so many much eyeball to cut.

wow, he really knows he’ll need it again and still wants to do it? wow, kinda crazy

Yes the words touch up apparently means less of a big deal to people I guess. I didnt know lasik meant that you need a “touch up” I was just scared of my eyeball getting cut open and I could go blind. But now that I know people go back for a “touch up” I am appalled.

Oh my gosh how terrible, it makes me shudder to think what things “doctors” do to mess up our lifes.

This just blew me away, if money wasn’t an issue I still wouldn’t consider having a procedure done that I knew would have to be done again in 10 years. You only have so many much eyeball to cut.

I don’t think people realize the corneas never heal. Ever.

I heard an optometrist outright lie to another patient that he himself had been born with and still had excellent vision. At best, that was a stretch of the truth…

He left out the middle part about having had refractive surgery about a decade earlier for myopia. This came out when I was told I was likely a good candidate for it myself.

Not only that, but I think he lied to me as well when I asked if he was satisfied with the outcome of the procedure and if the vision was stable all those years…I saw a Bates book at the back of the room in the bookshelf…yikes.

A lot of optometrists have had refractive surgery. I don’t know what percent, but a decent number. Ophthalmologists, though, far less. That tells you something.

I once asked a woman, on a date, if she was wearing contacts because her eyes were bothering her. She said no, she didn’t, but seemed a little unsure. I said, “You don’t? Really?” She said, “No. I had LASIK”.

Yeah, but they never tell you you have a corneal scar. Now why is that I wonder.

I need to have Morris Waxler on for a podcast style chat about LASIK.

A while back I spoke to a co worker who had Lasik and although I dont recall how long ago it was he said he was having vision loss again. The other day I noticed he had taken to wearing glasses. Not sure if it was for distance or just close up, he had complained about both. I had told him of course about my EM and what I was learning and that he really needed to get some distance vision. But I got the glazed over look on the prospect of being able to do anything to change it.
Come to think of it I’ve told so many people about it and even those close to me dont really want to look into it or try anything different. It’s almost as if because I am still wearing glasses I just cant actually be improving. Ha ha this makes me thrilled for the day I quit wearing them and people ask where did the glasses go.