Hi all! After reading quite a bit on this forum, I decided to get a test lens kit. I got a used kit on ebay, glass lenses, full size; Marco brand, “made in Japan”. It arrived today. It was a complete mess, with all the lenses mis-filed, and dirty, but after a few hours of cleaning and sorting, it looks great, and ‘most’ lenses seem present.

So this is my first ever encounter with such a beast. After playing around a bit, a few things occurred to me;

Thanks for any advice you can give! Also - I understand this forum is dedicated to myopia (the ending thereof!); does anyone know of a similar ‘high quality’ forum that addresses presbyopia, which my girlfriend has? Or perhaps, more to the point, a ‘high quality’ forum that discusses the general challenges with finding a good prescription; she’s struggled for 20+ years to get glasses that actually ‘work’ for her.

Spherical lenses aren’t; cylinder lenses should be placed properly - probably your test frame has some numbers on it - these are for cylinder axis.

To my knowledge, there’s no. Although most optometrists I went to set up spherical lenses, then cylindrical.

No matter how you’ll place lenses - by their value sticker inward or outward. With cylindrical lenses there should be axis matched by rotating the pointer of the lens to point to a desired “axis” number on the frame - that is, the axis you chosen.

Is there a preferred or required placement for the cylinder lenses vs the sphere lenses?

Usually in the trial frame the cylinder lens goes in the part that rotates (greatest distance away from the eyeball). In my trial frame there are 3 slots. The one that rotates is for CYL. I would put the markings on the trial lenses (usually on the metal tab) so that they face away from the person who wears the trial frame. On a -0.5 CYL lens, the marked line is the axis measurement (for minus cylinder). Most of the trial lenses I have seen have a + or - in indicating what they are on the metal tab (like these) — cylinder lenses on the left, sphere lenses on the right. The top row are plus lenses, the bottom row are minus lenses, you can see the plus or minus cut into the metal tabs. 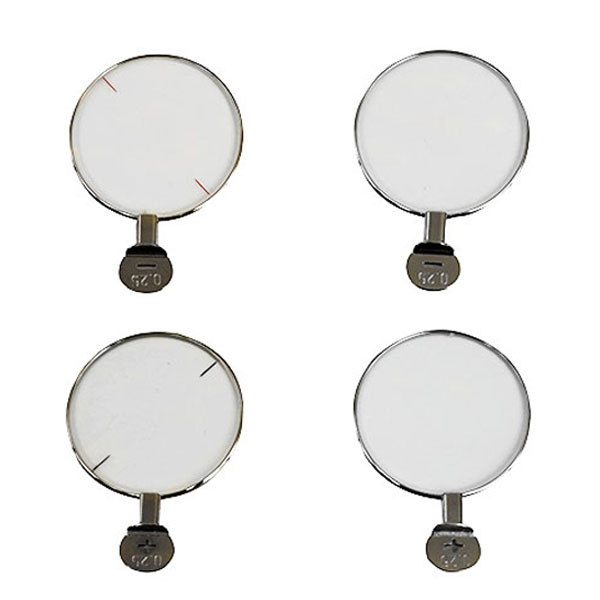 There are some eyedrops for presbyopia in trials now that look very promising. Coming Soon: Presbyopia-Correcting Eye Drops - Modern Optometry.

Your girlfriend can train her accommodation using lens flippers, there are also techniques she can use like crossing her eyes to trigger accommodation resources that she didn’t know she had. I think @Jakey has some kind of presbyopia course too.

This video Trial Frame Refraction, Plus Cylinder might give you some ideas about how to use the trial lens kit effectively

Regarding putting the Cyl lens in the test frame; my test lens ‘cyl’ set look like the image you posted above, lower left - mine are all +ve cyl. Both sides are marked with the value, and I can see the engravings from either side, so I presume it doesn’t matter which way I put it in the holder.

Is it quite normal for ‘axis’ readings to be variable like this? I’ve been ordering new glasses online recently and using the ‘axis’ numbers from 2013. Basically, is ‘axis’ measurement an imprecise science, and if I order glasses +/- 5 axis points from ‘ideal’ (whatever that is), will that make a big difference?

According to an optometrist I talked to, the smaller the amount of cylinder correction is (the absolute value of the cylinder number), the less the exact axis is important. In subjective refraction it proceeds until you can’t tell a difference and then they probably split the difference or settle on a round number. [Opticians in the lab who make the glasses will sometimes even throw away or disregard a small amount of cylinder when they see a prescription like -7.5 SPH -0.25 CYL.]

The higher the amount of correction is, the more distortion is introduced by anything being a little out-of-whack. Sliding your glasses down your nose a tiny bit doesn’t do that much to a “-1 prescription”, if you had “-20 prescription” it would make a huge difference.

So no, it probably wouldn’t make a difference if you ordered axis 75 or axis 73, in fact the lab might just make both of those exactly the same way. To the extent that your eyes aren’t perfectly round spheres, the abberations probably also aren’t perfectly cylindrical. In many cases when people wear contact lenses they just trade half of their CYL number for additional SPH and it rarely causes ill-effect.

There are some eyedrops for presbyopia in trials now that look very promising. Coming Soon: Presbyopia-Correcting Eye Drops - Modern Optometry.

The majority of them work by pupil constriction. I have learned how to constrict it consciously, it mimics active focus on the distance, especially at night or without correction.
Although Novartis is making lens softening drops, those really look closer to cause-addressing ones.

Yes, I just recommend having them facing out so you can see what you have loaded in the test frame when you look at it head-on to read the axis numbers. From the point of view of “a ray of light” it’s just how thick the glass is and doesn’t matter whether the glass is facing forward or backward. It just makes it easier to keep track of everything like putting your files in the file cabinet so that the labels face out toward you, or putting the spine of the books out on the book case so you don’t have to take it out to read it. [I don’t have a complete trial lens kit so I can’t follow the advice below.] 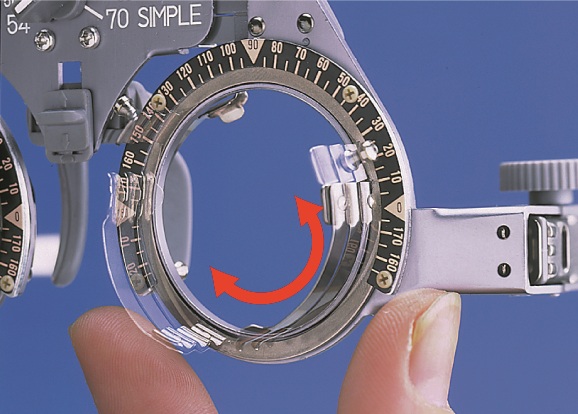 Thanks for the help getting started! I’m now quite comfortable with my ‘kit’ and I’m so glad I bought it! I’ve already discovered a problem with my prescription; casually, I noticed my left eye wasn’t so great, no matter what I did with diopters. Then I started playing with axis, and … eureka! … I was off by 15-20 degrees! So now I get to order more test glasses!

Now that I have dialed in the right strength, and the right axis, it has brought to my attention that at night (actually, outdoors at night - in darkness), even with the perfect Rx, my left eye is not great. So I’m going to now play around with different settings just for nighttime. I’ll buy a new set of glasses just for nighttime driving, if necessary! So this test kit is proving to be very valuable!