No matter how quaint our little forum is, or how the Facebook group has only 13,000 members, just look at these stats about Jake’s YouTube channel: 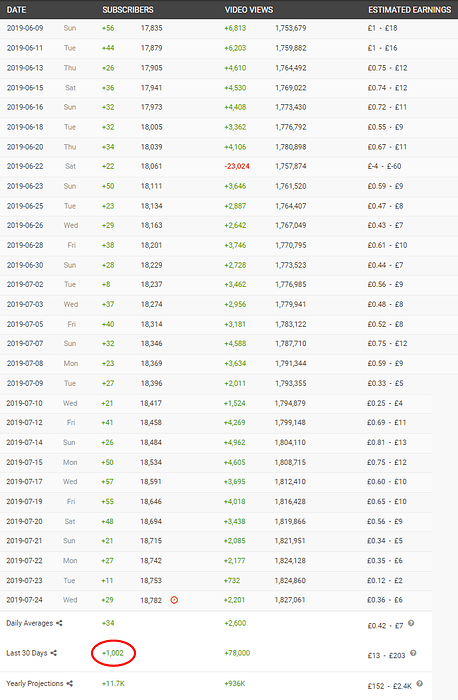 Just think, every month that goes by, boom that’s another 1,000. Boom, another 1,000. Another, another. There’s also exponential growth in all of this, you can notice how the gradient of the line is getting higher by late 2018 early 2019. This is a path to victory, every one of those subscribers probably wears glasses. Perhaps very few of them even try the method, but those that do will likely tell other people about it, especially if the results follow.

Very strange being more or less at the beginning of something that could be so influential if given the chance. We should never stop believing that crazy fast growth is just around the corner, because the signs point to that it is as far as I’m concerned.

100% agree Andrew…just completed an 11-day road trip with my nieces and nephews, all addicted to their phones and some are not even teenagers yet. I’ve said before the rest of the world is too busy socializing and entertaining themselves, they’re not cognizant of the damage being done to their eyes… at least not now.

We slept in one hotel room 2 nights and projected movies onto the cathedral ceiling with my phone which was a funfest and the only way I could get them off their phones and relax their ciliaries when we weren’t sightseeing. Even eating out was a struggle for them to stay off their phones. The explosion will certainly happen when our youth grow up if not sooner.

Good one, Andrew. Also could put more effort into the Tubes for more growth. It’s definitely ongoingly kind of a side project rather than full-on. If we did it like Tom Green’s Crash Course (world history, so awesome) - or with Lambos and yoga girls, or while unboxing toys, or while playing video games … pretty much anything besides what we’re doing now, it’d grow faster.

Meh, though. No huge rush.

I’m 100% certain that there will be a moment where the whole thing just blows up. One huuundred percent. That’s mainly why I’m treating many of the little complaints and suggestions like a major deal. For now for example, it genuinely couldn’t matter any less if the ‘about us’ page is my digressions about eye gurus. But when it came up in the forum that it feels wrong, I spent time to update it properly. Thinking that one day a zillion people are going to read it all at once, and it’s going to matter that stuff is tight and ready.

Last year (year before?) the BBC came hounding to do a myopia documentary. I said no every time they asked, because … we were super far from ready. Especially the size of the community back then, it would have been a mainstream massacre and over in a heartbeat. Like a goldfish in a shark tank.

Thinking about it like roots. A million little roots need to grow for the tree to be strong. All the little podcast pursuits right now, so there’s more independent voices, more dialog, more real conversation. There needs to be a lot of it to find for new curious searchers, and a whole lot of people saying, “yup this is legit”.

Obviously never actually going to be ready for the explosion. But the closer we can get, the more likely we’ll make it to shore.

I agree with you and share your enthusiasm about this stuff. I do believe we are part of a world changing thing. Its pretty cool.

Everything you said here is very true. Good points. Made my laugh out loud also.

A documentary for endmyopia and we could all be in ir. I’m sure there are enough computer guru’s here to help make an awesome film. Lots of sad stories with happy tears. We could call it Brave New World Ending Myopia.

I can see it now, we start out the film blurry and when it comes into focus there are shadows of people walking forward. When you see their faces you see that they are all wearing glasses. Then with a determined fashion they rip off those glasses and throw them away…

All that just to troll retail optometry. 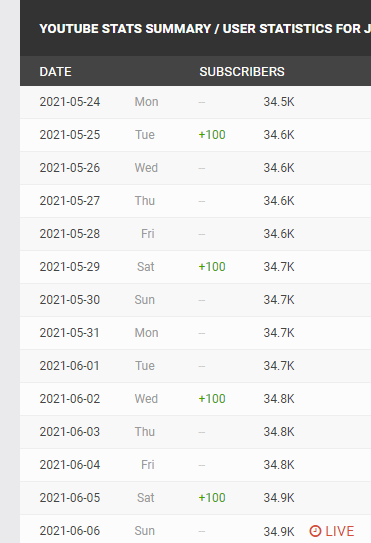 Soon I’m gonna have to order that fake beard and the robe and invest in some copyright chats music to reset audience expectations.

invest in some copyright chats music

Rather do something similar to what The Higherside Chats has with the own lyric and song, I loved that

(bottom one here, or it’s in the end of his podcasts, last ~4 minutes)

Exactly 100 subscribers and exactly twice a week and nothing in between? Looks strange tbh

Instead of 35,561 for example, you will just see 35,600 or 35.6k rounded up. This was to prevent ‘subscriber battles’ on the platform when PewDiePie and T-series were having a battle to determine the top YouTuber, which caused a lot of drama.

So there is no public information about the exact number of subscribers a channel has. The creator can still see though:

Exactly 100 subscribers and exactly twice a week and nothing in between? Looks strange tbh

I don’t see anything strange on my end. There’s a different amount of subscriber things every day (first time I’ve looked at it, quite possibly). 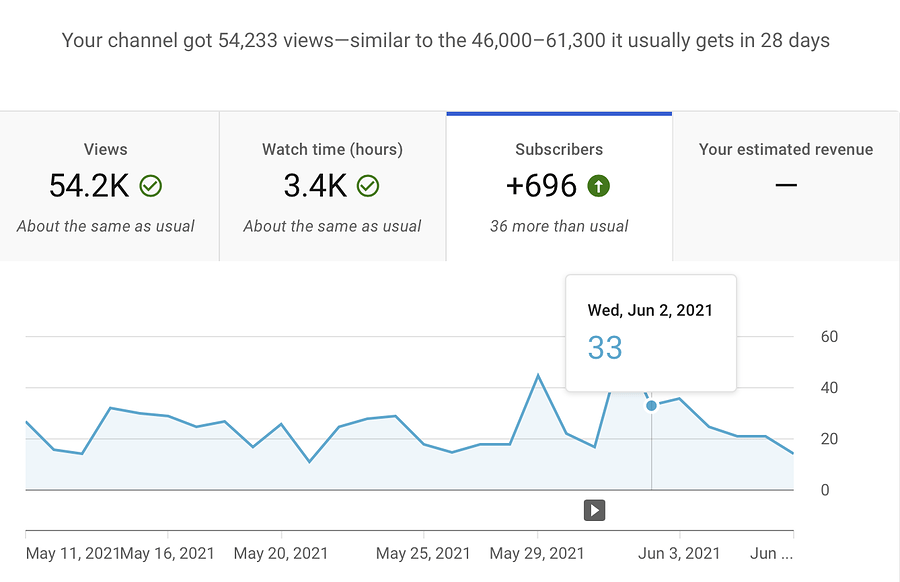 So there is no public information about the exact number of subscribers a channel has.

There is while you are still under 1,000