energy to change the cellular function. This research is aimed at verifying the hypothesis that LLLT treatment could control

myopia progression and comparing the abilities of OK lenses and LLLT to control the refractive error of myopia. Eighty-one

wore single-vision distance spectacles for 6 months were included. Changes in axial length (AL) were 0:23 ± 0:06 mm for

for 6 months. Changes in subfoveal choroidal thickness (SFChT) observed at the 6-month examination were −16:84 ± 7:85 μm,

with the baseline spherical equivalent refraction (SER) and baseline AL in the OK and LLLT groups. Increases in SFChT at

1 month and 6 months were positively associated with age at enrolment for children wearing OK lens. At 6 months, axial

elongation had decelerated in OK lens-wearers and LLLT-treated children. Slightly better myopia control was observed with

LLLT treatment than with overnight OK lens-wearing. Evaluations of age, SER, and AL can enhance screening for high-risk

Tired with their minds locked on only preventing. The best defense is attacking… well, in this case, absolutely yes. Anyway, the results are promising, mainly for those stopped at -3s or -4s. High myopia needs to be reversed due to its threatening characteristics.

Uploading: ok.pdf…
this is the paper

I just don’t understand the point. It’s obvious to me that just not using distance correction for closeup will limit myopia progression. Even being on phones 10 hours a day at 33 cm will only progress to 3 diopters of myopia before that’s at the edge of blur. Where is the nearsighted stimulus to keep progressing then? Just don’t wear glasses while doing closeup. Very few people were more than 3 diopters myopic for that reason before glasses were widespread, I suspect.

I guess recommendation to take off the glasses for close-up would acknowledge the idea that lenses induce myopia, thus you can’t even suggest that, I suppose without opening up the entire eyeglasses industry to litigation…

Try this link for the paper: Orthokeratology and Low-Intensity Laser Therapy for Slowing the Progression of Myopia in Children

Red Light (650 nm) for three minutes twice a day showing some good results for the kids, including decreasing axial length. 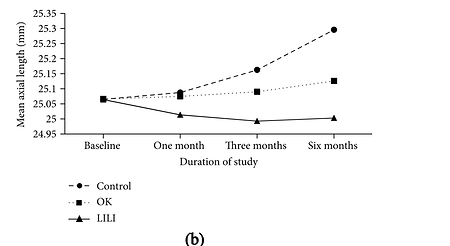 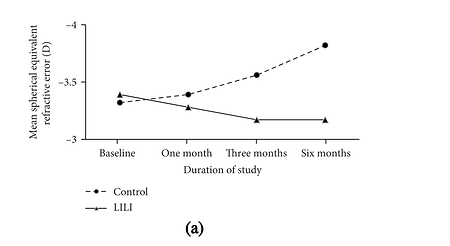 I am not so satisfied with prism. The image quality is suboptimal, reduction in V/A and worse color vision, especially in horizontal plane if they’re base-in without vertical component.

Additionally, if I use them on a regular basis, when I occasionally wake up in the early morning my eyes go away from each other and in the morning I have astigmatism worsening. Maybe it’s when I use them also for the distance. What are your prism values, 10 BI each eye, one eye or total (5+5)? Mine are 5 BI for each eye and that’s total 10 BI, I calculated them for 67 cm distance by a formula:

So, I entered TotalPrism / 2 for each eye.

However, I have a tendency for both esophoria and exophoria. Esophoria (crossing at nose) tendency is way more severe.

The strongest I have are 5 PD base-in each eye (10 total), for laptop screen use only. I wouldn’t even walk across the room in them. I one clear pair in +1.75, and raspberry tinted (anti headache) in +1.25 strength. They’re great for what they’re for closeup screen use, and nothing else.

If you have a trial frame or Maddox rod lenses you can test phorias and tropias etc and see what works well for you for close up. They make a handy phoria measure device which is a Maddox rod occluder with a 10pd variable prism, found one cheap on eBay, good for troubleshooting.

I wouldn’t even walk across the room in them.

Do you have double vision if you walk through room in them?

They produce all kinds of crazy distortion, I tried wearing the red ones in the kitchen once (more for avoiding headache than any thoughts about focusing) and the top surface of the stove looked downward sloped (no good for cooking). I can clear prism using prism bars but see no benefit to trying to clear high plus and prism at the same time, they’re just “task lenses” for me to make the laptop use less harmful, and if I look through them at an angle they’re producing useless and undesirable focal planes.

They are great for the things I had them made for, useless for everything else.

I can see at infinity in +0.25 but not with +1.75 or +1.25, so that’s the limiting factor more than the prism, even though the prism would be inducing a lot of unwanted divergence and exophoria.

The question was about just the binocular vision.
I occasionally don’t see one image with 5+5 BI at infinity, I encounter double vision. do you?

I thought the divergence range which is normal is 10 PD at infinity. I looked more carefully and no, prism fusion range is only 6-8∆ at 6m, everything else is desirable but not mandatory. Now I have 5∆ at infinity, so 6∆ at 6m, that’s the lower end, but normal. 10 PD is not always free of diplopia at distance for me.

I just returned home and popped on the red glasses (+1.25) with the base-in prism (5 PD BI each lens) and looked straight into the distance, and I don’t experience diplopia, just myopic blur.

The base-in prism is intended (by me) to relieve convergence at near, to clear the image through those glasses at distance one needs to use divergence above what’s normal for distance (induced exo?) and tax your fusion reserves. They provide a very warped view of the world if worn for distance, especially if you’re looking around through the lenses and not just straight ahead… 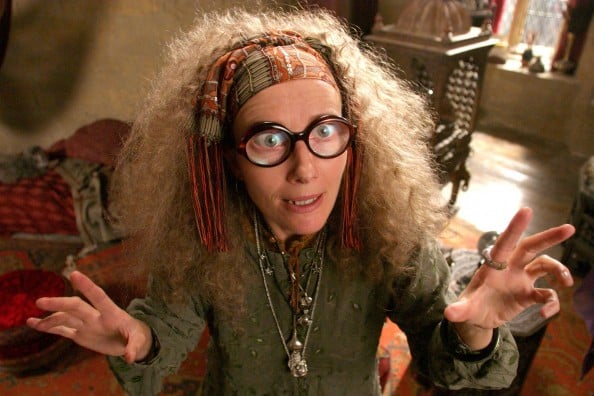