🎙🤓 Preview: Endmyopia Episode On "Get Over Yourself" with Brad Kearns

Preview: Endmyopia Episode On “Get Over Yourself” with Brad Kearns

Coming out in a few weeks officially, our episode. Brad co-wrote some books with Mark Sisson, is all sorts of tight with the whole diet and fitness online community, and all around an interesting and down-to-earth guy.

Jake meanwhiles, his usual cringe-fest self. And there we have it. 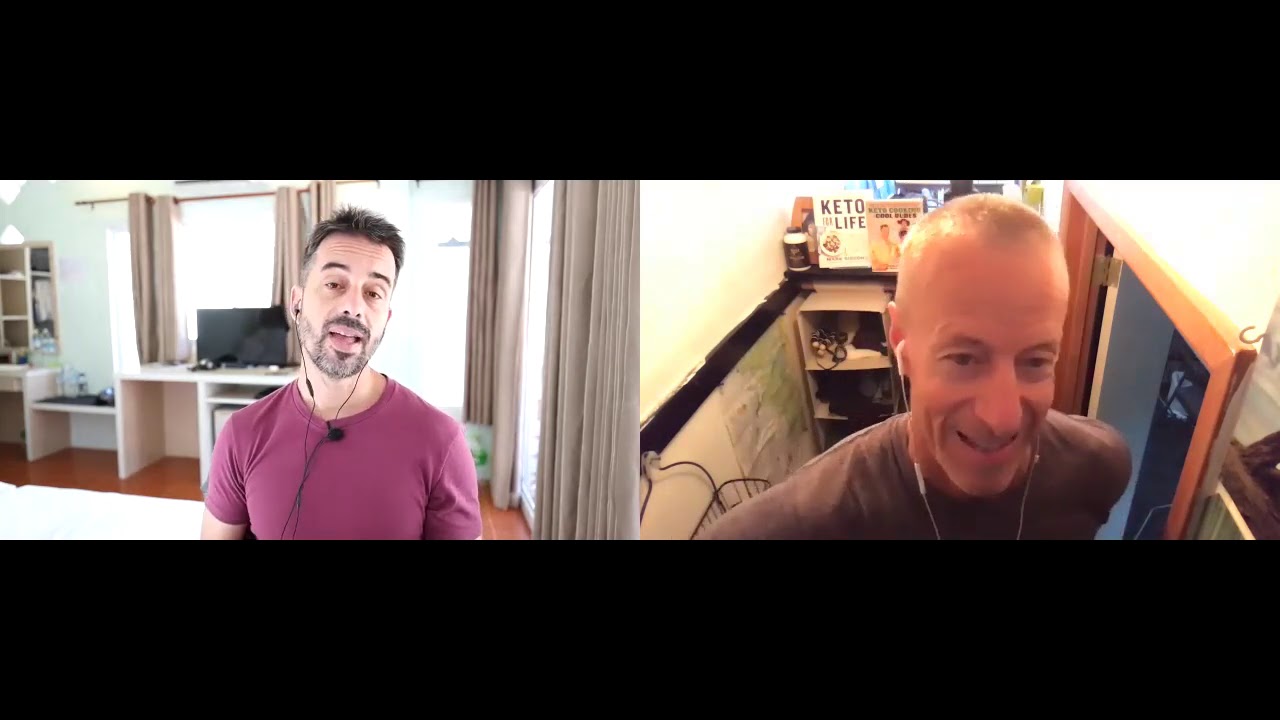 Good news though, there are six or seven more of these various episodes, on various podcasts, somewhere in the works of being prepared for release. That means a lot more ear-balls out there, being introduced to the various contentious ideas about your eyes, being not broken.

Nothing to cringe about, Jake. Great job, and I was not surprised by how ignorant this guy was about vision - I was the same before EM.
Lots more of these may make a bigger dent in the outside world. Someone who has the discipline to radically change diet and other lifestyle habits might well be tempted to develop the time and patience to fix their eyes.

By the way, congratulations on the birth of the little one.

Hey Jake,
You recently shared the post where all the podcasts like these were collected for easy access to listen. I’ve not heard of most of those podcast people (newbie to podcasts here and maybe different interests on my part), and I was wondering if you could give a Top 3 that you felt you enjoyed talking with the host, and felt you both had a good rapport/time with.

If anyone else watched any of the podcasts of Jake with these hosts, and liked one particularly, please let me know. Thankyou!

Thanks for sharing Julia. Just went through and looked at the dates published. Jeez, Jake did a ton of podcasts in 2019!

And I agree, if there’s any that podcasts that stick out to you do point em out to me plz

I think this one was one of the best out of those Jake had as a guest in other people’s podcasts. The interviewer might not be familiar with myopia’s technical aspects (few people really are), but the interesting thing is that he is part of the intended audience for EM. Most of the other interviewers have never had a problem with eyesight, they started noticing some ciliary spasm and presbyopia in their old age working with screens and that’s about it; they cannot relate to the infernal trip down the myopia road, the headaches, the helplessness, the “you’re a genetic failure”, … This man has at least got the intuition to ditch the glasses to stabilize his eyesight, he found Bates, that’s like a lot of people on here before they found EM (and better than some like myself). So this episode was very engaging to listen to, because here was a guy discovering something that is relevant to him, not just any podcaster with perfect eyesight who’re just listening, scratching their chins and musing on the parallels with other areas in which the mainstream health care system has failed people and exacerbated their symptoms.

I loved how he latched onto the term “Strain Awareness”, I think that’s pretty neat too. I personally like to speak of “Eye Literacy”; a term I derive from the more common concept of “Body Literacy”. Basically the point is that I was not unaware of the symptoms of strain, I simply lacked the literacy to recognize them as such. Now that I can ‘read’ my eyes better, I know that eye strain sometimes manifests in itchiness, burning, headaches, unwillingness of the eye to focus (just goes like blank stare at nowhere in particular), increased ghosting, increased blur, tight feeling along the sides of the eyes, etc. I do remember feeling those before and pushing through because I had no concept of eye care at the time.
Learning to read one’s own body is so helpful in order to know the meaning of different types of pain (and that’s really what people mean by “listen to your body”, it’s “learn to decipher its signals” rather).
A good example of that is “headaches”; whenever someone asks about the reason they might have headaches, especially on the EM group/channels, I’m like man I don’t know, what is this headache even like. You get the throbbing hormonal headache, the bad posture headache (usually the one that starts in the morning), the too much focus headache, the too strong glasses headache, the sinus headache, the congested liver headache, the low blood pressure headache … None of these feel the same, and if we don’t have the language to describe how different they feel, there is no way for anyone to find out if they’re supposed to get a massage, a glass of water, a pill, or just to get their glasses changed. So I’m all for recognizing symptoms and having language in our heads to define them and associate them with strain or any sort of issue.

Also on the subject of “people don’t care about their eyesight”, I tend to be more optimistic, like this guy. I mean, yes, “improving” for people whose eyesight has wasted away a pair of thick glasses at a time is… a sensitive subject indeed. However, most people want to improve and if they don’t want to improve, they at least want to stop getting worse (glasses are not cheap anyway). So it’s true that people who’ll feel the most motivated by those news are those low myopes who have not accepted that they have to wear glasses yet. But stopping myopia progression is so simple that we’ve started taking it for granted here at EM, and the truth is I think that 90% of myopes would be extremely interested in hearing about wearing reduced strength glasses to keep your eyesight from getting worse without compromising the quality of your life. My mother who for the longest time believed the mainstream is not very motivated to improve because “I’m old and I like glasses” but that lets me nag her all the time to start wearing differentials because this is not about improving, it’s just about not getting worse. I spent some time since discovering EM not having the time or energy to do the right things and troubleshoot. So yes, I did not improve, but I hardly dare to imagine where my eyesight would be if I had not read the seven days email course in 2018 and stopped my eyesight from getting worse; my starting point kept stable and waiting for me to be ready to reverse it. I was not immune to the “If only I’d known about that earlier” effect, there’s no age for that (especially not after having cylinders twisting your eyes in unbelievable ways), but was I grateful for discovering EndMyopia? A million times yes.

Hey Salt, Thanks for your recommendation, I definitely put it on my watch list.
And I agree with your reasons listed above, I think having a interviewer who also experiences myopia is really beneficial, because its personal.

And Jake, what do you mean by ‘Preview’? Is this not the entire episode?? (I checked the end of the video, answered my own Q). I initially thought that it was like a 2 min blurb which is why I didnt click on the video till Salt approved of this video.

In my mind- preview usually means like a sneakpeak.

If anyone else watched any of the podcasts of Jake with these hosts, and liked one particularly, please let me know.

I like his episode on the ReWild Yourself podcast, the interviewer is nice and I discovered plenty of other interesting people in that podcast afterwards. I think that by some point all the interesting people run into each other in those alternative improvement podcasts.

Thanks for this recommendation too, I’ll check that out. I like learning about other interesting people too. Plus, I’ll have a list of podcasts to listen to while I take my daily walks. Win win

By the way, congratulations on the birth of the little one.

a Top 3 that you felt you enjoyed talking with the host, and felt you both had a good rapport/time with.

I wish I could! These honestly kind of are blending together in my head now … and just did four more over the last couple of weeks, so now it’s pretty much hopeless for my tiny brain.

Not that it was a special performance, but Ivor Cummins really opened my proverbial eyes on quantifying heart disease. That stuck with me as far as a reasonably objective way to look at mortality risk of the main thing that tends to kill us.

Thanks for sharing Julia. Just went through and looked at the dates published. Jeez, Jake did a ton of podcasts in 2019!

Yea my goal was to do 3-4 a month. Had staff and all, finding and contacting. Ended up being a fair pain managing people (it’s really not easy at all to get on podcasts, a lot of times). So it got sidelined for a while, now on it again.

Learning to read one’s own body is so helpful in order to know the meaning of different types of pain (and that’s really what people mean by “listen to your body”, it’s “learn to decipher its signals” rather).

For me, “Listen to your body” is about connecting my pain to my actions. My body is complaining about something, but it’s not very coherent. It’s up to me to apply my higher brain functions to connect what I did yesterday to the pain I have today, and track if that’s just muscle soreness that goes away or if I need to moderate that activity next time to avoid seriously stressing my body.

EM gives me tools to quantify what’s going on with my eyes, and the power to moderate the activities that bother me. Before I was just at the mercy of the Opto, who always insisted on jacking up that prescription to the point it hurt me…

I’m actually subscribed to Brad Kearns podcast and have had this saved since it came out, but just now finally got around to listening. This is one of my favorites you’ve done for many of the same reasons @Salt said above. You were able to explain things in a way that most people can understand and should get them to visit the website at least. Oh, and hopefully that cataract experiment you mention ends up working out.

I’m actually subscribed to Brad Kearns podcast and have had this saved since it came out, but just now finally got around to listening.

Having a one-on-one with Brad on Zoom tomorrow (actually Luke Storey will be on it too), to go over some of the endmyopia basics and help him get on the right track.

Brad did an update show Episode 247: “A Little Bit Of Blur” In Your Life - YouTube. Sounds like he’s taking it seriously. This is from January, but I just noticed it because I’m waaaaay backlogged on my podacsts/YT videos.