You might not agree with everything he says, but he points out a lot of interesting things 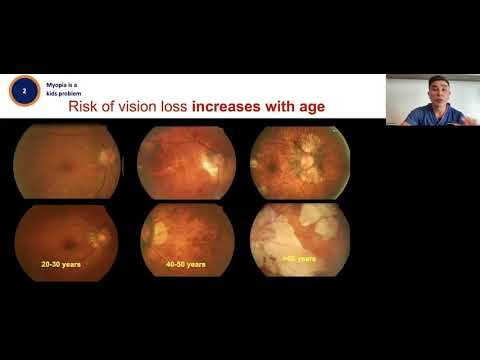 It’s pretty amazing that they completely manage to miss the iatrogenic nature of lens-induced myopia and aren’t quite sure that near work is a problem. Interventions that have been known about for a hundred years or more like wearing reading glasses for reading to reduce eyestrain don’t get any consideration at all.

Too bad the whole planet is catching bad genes all of a sudden.

Science has failed myopes. No reason to belive in it anymore.

Too bad the whole planet is catching bad genes all of a sudden.

Did you see his chart that grouped countries by education system and myopia prevalence? Seems like he has a good idea what causes myopia but doesn’t want to say it without a study to quote.

Interventions that have been known about for a hundred years or more like wearing reading glasses for reading to reduce eyestrain don’t get any consideration at all.

He does recommend bifocals for children.

I think the doctor is one of the good guys and he’s sort of saying the right things, but regular plus lenses with base-in prism work better than the bifocals for kids (because kids can look through the center or top part of the bifocals at the screens, books, and phones.) Just wear the plus lenses indoors or for screen use or homework. 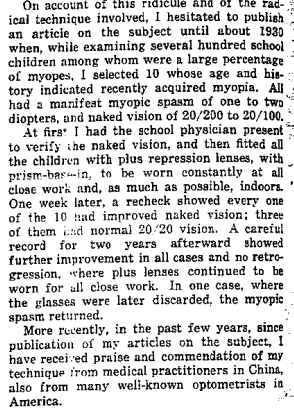 The article above talks about how the mainstream optometry business was wrecking kids’ eyesight back in the 1930’s, and nothing has changed today except that now they have laser beams to aid surgeons. They’re still following the completely broken model that created a myopia epidemic, determined to pursue it to its logical conclusion until every single child has myopia.

I’m not sure what to say about an industry of “educated” people who fail so miserably that they don’t even talk about fixing problems-- in fact it’s taboo to talk about myopia regression-- and instead measure their “progress” by the speed at which their patients deteriorate.

nothing has changed today

What has changed is a cultural emphasis on early reading, on college prep, and near work hobbies. Nowadays in America it’s considered irresponsible to kick the kids outside and tell them to come home when the street lights come on. They have to either be supervised or cloistered inside with the video console…