Smart contact lenses could one day replace our own eyes

I wasn’t going to post this until I read the last paragraph. Very interesting (scary as hell) future.

Peer further down the road, into the post-smartphone era, and lenses like this could replace our very eyes. Futurist Gary Bengier, a former Silicon Valley technologist, writer, and philosopher, envisions a world 140 years from now, where displays aren’t just worn in contact lenses but are actually part of you, thanks to a chip inserted behind your ear and connected to a corneal implant. In his new book Unfettered Journey, he describes how artificial intelligence and mind-machine interfaces combine with retinal implants to essentially build Wikipedia directly into your body.

The brain chipping / implant stuff is very interesting. It’s a double-edged sword. There are people with Parkinson’s disease who can greatly benefit from a brain pacemakers-style device. Deaf people who can hear again with cochlear implants. With retinal implants we’ll eventually get to some blind people who can see. Then there’s all the DARPA super-soldier stuff like monitoring various states and turning off pain, etc. Of course, then there’s all the Jose Delgado / Physical Control of the Mind that they’ve been working on for 60 years, where you can essentially control people or animals like remote-controlled toys.

José Manuel Rodríguez Delgado (August 8, 1915 – September 15, 2011) was a Spanish professor of neurophysiology at Yale University, famed for his research on mind control through electrical stimulation of the brain. Rodríguez Delgado was born in Ronda, in the province of Málaga, Spain in 1915. He received a Doctor of Medicine degree from the University of Madrid just before the outbreak of the Spanish Civil War. During the Spanish Civil War he joined the Republican side and served as a medical c...

When you upgrade your Android phone if they’ve done something annoying or it wrecks things at least you can get a new phone. When they botch the upgrade on your surgical implants it’s potentially more than a little annoying. 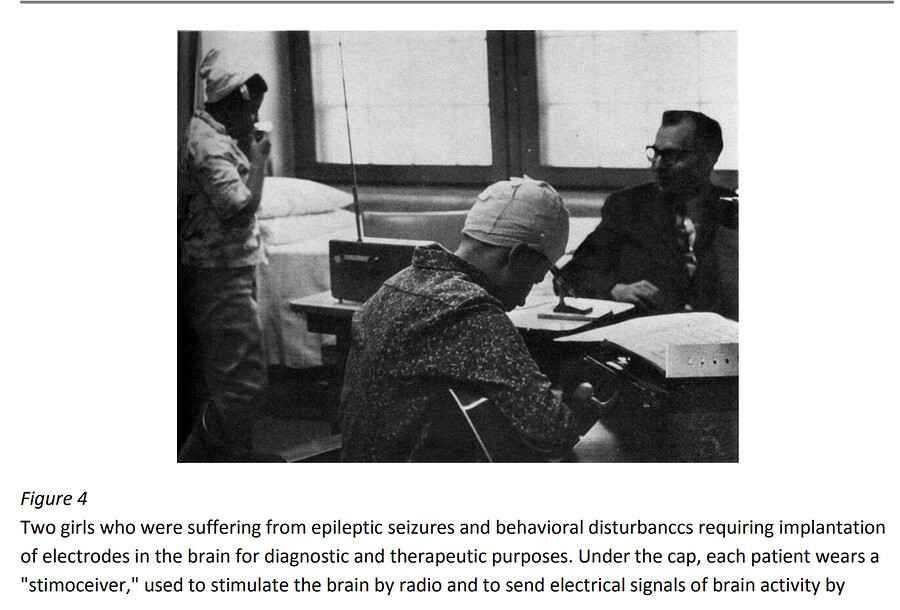 Link to Physical Control of the Mind, by Dr Jose Delgado.
Very interesting book. Things that don’t get talked about a lot outside of certain circles. http://www.pactsntl.org/assets/pcotmbydrjosed.pdf

As a hugely tech dependent society it stands to reason mankind will try to replace many biological functions with tech. I totally agree that it is a terrifying future indeed. While @nycmao brings a solid point that there are those who can and even now do benefit from such technologies. As he also points out, the reality is the line will always get crossed, and it will always be for the worst.