UPDATED! 🚨 Podcast: We Talked To An Optometrist - Who Is Into Reversing Myopia!

Podcast: We Talked To An Optometrist - Who Is Into Reversing Myopia! 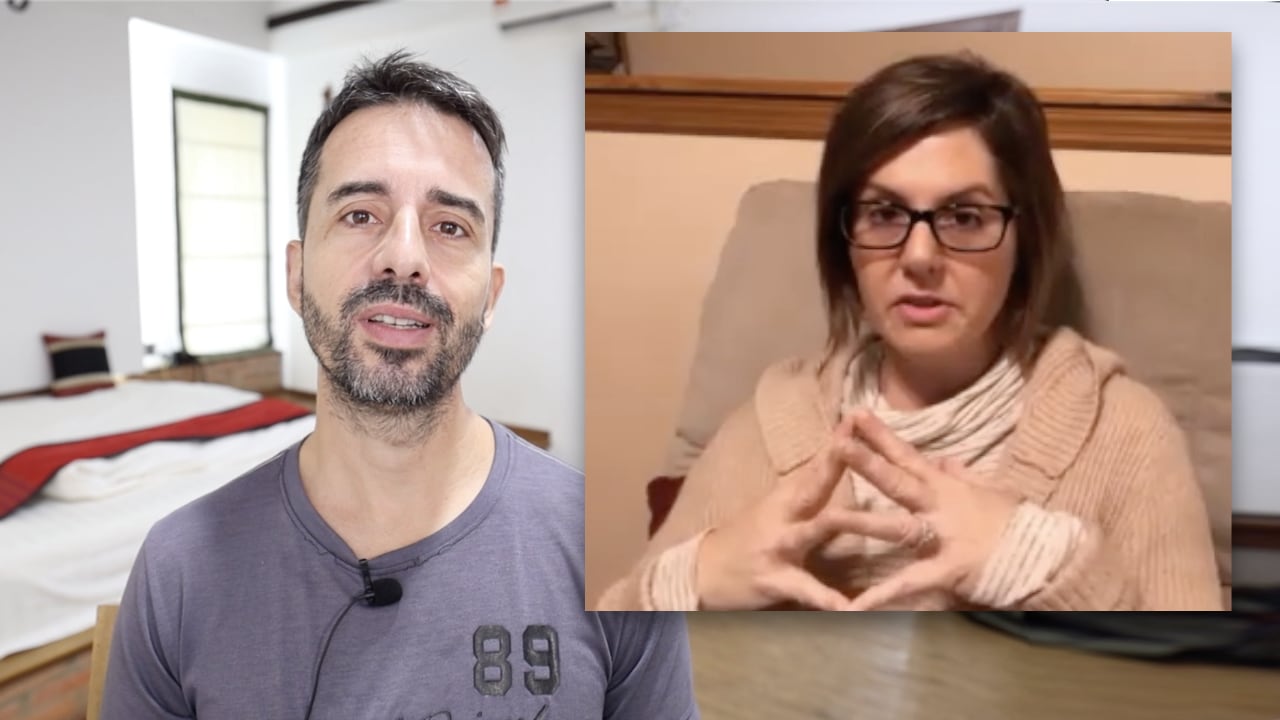 Now … can’t publish this interview till we get the green light to do so. It’s filled with sacrilege and controversy and various ideas you may or may not agree with. Which is really all we want, discussion and ideas, something besides the status quo.

I’ll add here (what I didn’t say in the Facebook group). I for one definitely don’t agree with a number of points and ideas discussed. But that makes it all the more fun and interesting, and could be a great series for lots more deep diving into myopia reversal, limiting beliefs, and possibly even various valuable lessons in unicorn farming. Who knows.

Hopefully you’re subscribed to the endmyopia Tubes, got that notification bell thing on, so you’ll know when this one comes out (hopefully).

UPDATE - Here it is: https://www.youtube.com/watch?v=t2CX_q5XyMY

I’ve kept it unlisted for now so it’s not showing up in public. I still worry a little bit that all the trolls and non-friendly optometrists that watch us will have field day with Julie. Unlike us sticking with a lot of core science ideas, she’s not afraid to get a bit … out there.

Looking forward to this one.

Not the first and not the last, but each one should be celebrated, because, as much as it doesn’t seem like it right now, this is a lot of what will be the likely future of the profession…apps and automation are killing not Optometry itself but the “quick vision fix” aspect of it. What’s left to focus on for newer Optometrists? Vision improvement, the Neurological side, and the Medical side, plus a few other more obscure things.

Edit: I bet eventually, in 20 years, 1 out of 5 Optometrists under a certain age will practice at least some form of vision improvement. It’s inevitable…as long as this type of thing keeps gaining momentum.

I don’t think it will take that long. It would be nice if I were around for long enough to see it.

I think you’re right to keep it unlisted. I’m going to watch it now.

Btw, It’s cool how her name is similar to yours.

Btw, It’s cool how her name is similar to yours.

I know right?! Just realized that yesterday. Sometimes the simulation seems to be a bit light on creativity (or maybe just the iPhone XIV it runs on is the base model).

Awesome interview! It was really nice to hear from someone in the profession that also acknowledges that myopia can be reduced… .especially for someone new like me.

WOW, WOW, WOW! Do I love this! Asymmetry and the beginnings of astigmatism explained. Rapidly changing astigmatism explained. Both of these are issues for me. We need many more like her. I also like her foray into unicorn land (meditation etc.)
We on this forum are all outside of the box and kicking at the mainstream.

She’s way into the unicorn farming.

After recording we talked a bit more and definitely … a bit of the deep end. All good though, though she’s IMHO going a bit far under-correcting herself and could use a dose of endmyopia to get her diopters sorted.

Yes, but a normal horse could be hiding among the unicorns. Yes, she is undercorrected, but nothing compared to my undercorrection (uncorrected) and I am nevertheless making progress.

Great interview! Anyone know what well known “visualization/ meditation” technique she is referring to in order to speed up the retraining of the visual cortex part?
She mentiones it at 11.25m in.

I think any system of meditation that calms the mind will do it. I have no idea what visualisation technique she is referring to, but would guess it is something like closing your eyes and seeing objects clearly in your mind’s eye. This could work somehow like athletes using visualisation to improve their performance, which has been well tested.

Watched it today. I wanted to hear more about the symmetrical reduction. Does the other eye catch up fast? In EM we do it after 2 diopters, like the last thing. Could be important, could be not.

I found the astigmatism bit interesting too.

I am also wondering what visualization she was talking about. Because if you are visualizing seeing clearly, it doesn’t make sense how it helps.

ed the post, but the reality is, I am so excited to see evidence of doctors like this, who went through school, and have not been brainwashed into oblivion. There is hope for humanity.

Watched it today. I wanted to hear more about the symmetrical reduction. Does the other eye catch up fast? In EM we do it after 2 diopters, like the last thing. Could be important, could be not.

I was honestly afraid to ask about her methods. Red flags being that she’s still at -6. And avoiding some of the more obvious explanations in favor of a bit more … further fetched ideas. If it’s so great, first hand experience is where it’s at. Show me how it works for YOU! Like a fat chef vs. a skinny chef, you’ve got to love what you’re cooking up.

Wanted to keep the whole thing at sort of high level, lower diopter glasses, myopia can be affected, here’s somebody who is talking some sense. But then of COURSE we turn off recording and out comes some serious levels of unicorn farming.

I’m totally open to that, though mostly my condition as above would be, use the magic on yourself first and foremost. Come on now.

Really like her though, feel like there’s some yin and yang going on, we had a great bit of friendly friction going on after the recording, and it’d totally be worth getting into meditation and light and various therapies. Only caveat being, mainstream optometry would so easily rip that apart as fully non-scientific and probably do a bit less for us as a cause. Though ultimately if she’d dig into some diopter reductions, reduce her myopia measurably, ok fine throw in some alternative therapies, it could be a great ongoing sort of story.

Lots of potential there. Just as always the ironies abound, it couldn’t have just been somebody who acknowledges the simple clinical science and leaves it at that. (makes sense though since that’s where things go when we go out of the box - the range of ideas without dogma can go quite far in all directions)

I thought it was interesting that she claimed to be able to make large improvements to people with + prescriptions. Makes me wonder waht she is doing there.
As for the unicorn farming stuff, you encounter that often on the internet and people tend to gravitate towards that the more liberal the city they live in is. This is with vision improvement, nutrition, and any other alt subject you can think of. Not really sure why, I think its the idea of “going against the mainstream conventions” that attracts them.
Its rather annoying because you get a lot of BS along with information you are looking for.

This was such a delightful interview and I really love how diplomatic she was, as you said. But yes, once you’re out of the box, there’s no longer walls and it’s much more difficult to keep in check I think. Personally I prefer it that way though. “Keep an open mind but not so open that your brain falls out”.

I really enjoyed this discussion, but I was quite surprised that she hadn’t thought to use her own techniques on herself until much recently long after she has already been instructing others. I wish she would have gone into the light therapy a bit more. I’m really curious how her progress will be, so I look forward to the next interview with her.

As for the meditation, it’s probably a great supplement. I use a personal EEG device bluetoothed to my cell phone which is really nice for helping reduce eye strain after I realize that text is starting to get blurry and I start inching towards the screen. My range of view seems to improve after a few minutes of it. I’m hoping it helps progress in the long run. Biological feedback is really important to help the body and mind learn what it needs to do. I’m currently trying to work with it to help achieve active focus for longer and with a larger range of clearance.

In a perfect world with a lot of money and a lot of scientists, it’d be cool to see what is happening neurologically when you tune into those eye improvement pathways, then use an interface to help a person learn how to achieve active focus etc. that way and more efficiently (like a tone that gets louder when you are activating that pathway). How far could the limit get pushed with progress that way.

I think her emphasis was on making sure to avoid it in the first place, by not correcting asymmetrically from the start. My first diopter difference is likely to have been very small. Over the course of the 30 years I wore glasses for large parts of the day, the diopter ratio became 3/6. This should not have been allowed to happen. The subsequent 30 years without glasses did nothing to change the diopter ratio. With the fast improvement of the stronger eye, it has become worse and is now 1.5/5.5. I have not forced this on my eyes as I have not used reduced lenses to improve - just AF. How this is going to sort itself out is anybody’s guess. But again, it is up to the individual to decide when and how to tackle equalisation.